WATERTOWN—A financial consulting firm that opened in August is preparing to expand.

Brie Sodano’s firm, From Sheep to Shark, works with clients over a six-month period to help them identify their life goals and the habits that have been preventing them from achieving those goals.

“I firmly believe that three months of tracking your transactions is a life changing experience because that’s where the truth is,” she said. “People write their budgets on blank sheets of paper and they write down how much they spend on stuff but none of it’s true.”

“IF YOU GIVE ME A MONEY PROBLEM I’LL TAKE IT TO WHERE INSTEAD OF BEING INSIDE OF A MAZE, I CAN BRING IT UP TO A LEVEL WHERE I GET TO LOOK DOWN ON IT.”

— BRIE SODANO, OF THE FINANCIAL FIRM FROM SHEEP TO SHARK 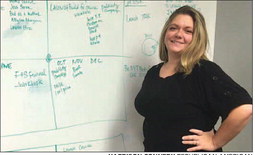 Brie Sodano poses next to her whiteboard at the From Sheep To Shark office. Sodano started the company in August and hopes to release an internet course and book by October.

Sodano, a former financial adviser at Edward Jones, is based out of an office at 76 Westbury Park Road, where a wall doubling as a dryerase board displays her life-planning skills.

A quick sketch divides the year in quarters, with different events like “vacation with kids” scheduled for different months. Logistics for her upcoming online course and book launch are written out nearby.

Sodano’s ambitions reach far beyond the 100 square-foot confines of her office. She is working on an online course and a selfhelp book expected to be released this year which she hopes will make her advice accessible to those who can’t afford one-onone time with her. She also plans on moving to a bigger office this spring.

Sodano said that entangling emotions with personal finances often prevents people from accomplishing their savings goals by causing them to mistake the cause of their struggles.

One client claimed she couldn’t buy a house because her student loans and credit card bill, totaling a combined $400 per month, were crippling her.

“She had some resentment toward this debt and so that affected her perception,” she said. “When we got into the transactions, the difference between what she said she spent on food and groceries and what she really spent was the money that was literally her house payment.”

Sodano founded her firm in August of last year, but she’s been immersed in financials since she was a child.

“My grandfather was a stockbroker, my aunts are bankers, my dad sold insurance, my mom worked on Wall Street when I was a kid,” she said. “I could have told you what a dividend was when I was a small child.”

She graduated from UConn with a degree in urban studies, a degree she said is akin to complex problem solving.

“If you give me a money problem I’ll take it to where instead of being inside of a maze, I can bring it up to a level where I get to look down on it,” she said. “Stuff that make sense to me don’t always make sense to other people.”