BREWING DOWN ON THE FARM

In addition to the Connecticut Wine Trail and Connecticut Grown produce, soon beer made with a significant portion of locally grown ingredients may sport a Connecticut craft beer label.

Although hops and barley are grown in the Nutmeg State on a relatively small scale, Connecticut breweries often purchase their ingredients from massive industrial operations in the Northwest. Some hops even come from New Zealand.

Currently, Connecticut doesn’t produce large enough quantities of hops and barley, or enough varieties, to supply the state’s growing number of craft breweries. This means money consumers spend on craft beer leaves the state when a brewery pays its suppliers.

Supporters of a proposed bill that passed the state House of Representatives 146-0 hope to change that.

“It’s a local jobs bill, it’s keeping money and business in the state in a growing sector, the craft beer industry,” Albis said. 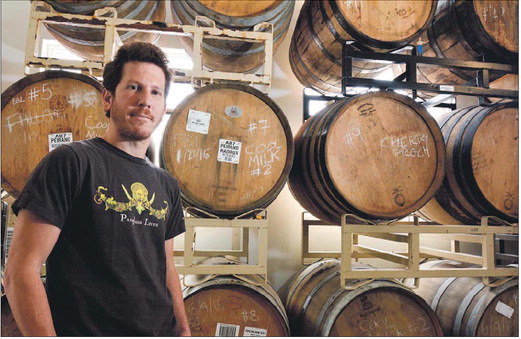 Barry Labendz, founder of Kent Falls Brewing Co. in Kent, stands in front of barrels in his brew house Thursday. It’s the first farm brewery in Connecticut. There may soon be others.

A sprout of Michigan Copper hops springs from the hops field at Kent Falls Brewing Co. in Kent.

Continued from Page One

“It gives farmers and brewers the unique option of both being on the same property in Connecticut, and that is great,” he said.

Kent Falls went through a laborious process to obtain zoning approval for its farm brewery in 2014. Without a framework for classifying a farm brewery, zoning commissioners found themselves in uncharted territory, which delayed the brewery’s opening by about a year, Labendz said.

He hopes the legislation, if passed, will streamline the process for other breweries on farms. For example, zoning commissions might not consider a brewery located on an existing farm to be a change in use that requires a special permit.

Beer, with its main ingredients being hops, malted barley and water, is a product of the land as much as wine is. Labendz said there’s a symbiotic relationship between brewing and farming. At Kent Falls, spent grain from the brewing process is used to feed chickens on the farm; their manure is composted and used to fertilize crops.

“We help each other in so many ways, that’s why a farm is an ideal environment for brewing beer,” he said.

Beer and crops can also be complementary goods, which is why Kent Falls is building a farm stand where customers can buy the farm’s products, including eggs, kale, beans, mushrooms, peppers, apples, rhubarb, garlic and shallots.

“They can come here for beer and leave with a full dinner,” Labendz said.

Kent Falls Brewing is on the 52-acre Camp Road Farm. One acre is dedicated to growing several varieties of hops, including Brewer’s Gold, Chinook, Cascade, Bitter Gold and Michigan Copper.

One of Kent Falls’ beers, a farmhouse ale called Fingerprint, is made with wild yeast and microbes cultured off fruit, flowers and hops grown at the farm.

Another beer, Tiny House, a mixed fermentation ale released once a year, uses all native hops. It’s made once a year, after the farm’s hop harvest in the fall.

Aside from hops, Kent Falls has used autumn olives and wild berries harvested on the property.

While the brewery has no plans of becoming a self-sufficient estate, Labendz looks forward to the day when all his ingredients come from local suppliers. Brewers enjoy working with suppliers they can interact with on a personal level so they can learn more about their ingredients. “I don’t know how many brewers have a favorite barley seed,” he said. “I do.”

The proposed bill requires farm breweries to use 25 percent locally grown ingredients during their first year, then 50 percent in subsequent years.

Beer drinkers say there’s an allure to sipping a brew with farm-fresh ingredients, touched by as few hands as possible.

Stefan Dicker of New York City, who testified in favor of the legislation, said it makes sense to combine farming and brewing because breweries obtain the vast majority of their ingredients from farms.

The concept of buying locally grown crops is near and dear to the heart of Susan Pronovost, executive director of Brass City Harvest, a Waterbury-based organization.

“Agriculture is that little talked about economic engine in Connecticut,” Pronovost said. 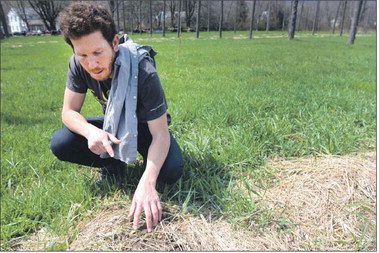 Barry Labendz, founder of Kent Falls Brewing Co. in Kent, looks at new sprouts of hops in his field Thursday. Below, he shows off some summer, left, and winter Pilsner malt.