LAUGHTER RISES AS UNDERPANTS GO DOWN

Imagine it is 1910 somewhere in Germany. There’s a crowd gathered to watch the King’s parade.

Suddenly, a lovely lady watching the parade go by feels her underwear fall to the ground. This is the hilarious premise for the farce “The Underpants” written in the early twentieth century by Carl Sternheim and adapted by none other than comic Steve Martin. No wonder it is so funny.

Director Dan Friedman has pulled together a fine cast and Steve Martin has taken an old script and brought it to life. This production is a farce, but not in the traditional sense. There’s not too much door slamming and there’s no mistaken identities. There is a lot of fuss over Louise’s underpants. A poet comes to rent a room in her home because of what he witnessed at the parade. So, too, a barber has declared himself her protector. Her egomaniac husband, Theo, is ashamed of her. He feels threatened about all the talk and fears that his government job might be in jeopardy.

While all of this sounds absolutely ridiculous to a 21st century audience, there are some truisms here that never get old. Most men are still attracted to women, whether the ladies are wearing underpants or not, and women have strong desires and passion.

Brianna Bowman probably doesn’t know who Kim Novak is, but Bowman has that Novak mystique that makes her positively enchanting.

Bowman’s performance is accented with eyes that reveal more than what they see on the surface. Her smile is every bit as telling as the Cheshire cat that got a lick of the forbidden cream from the breakfast table.

Timothy Huber as the self aggrandizing, arrogant husband is almost too good to be true. He has taken to this role with unbridled flair, making his character absolutely hilarious, and this is by far his best performance.

Michael Schaner as poet Versati delivers lines picked fresh and strongly resembling the poetry of the Bard and other great poets as well.

He is quite the foppish lover. Joe Manuele as Cohen, which he insists is spelled with a “K” to appease his prejudiced landlord, has a expressive face and milks it perfectly with raised eyebrows and shifty eyes.

Michele Leigh as neighbor and friend Gertrude moves effortlessly in and out of a scene with the touch of a warm and gentle southerly wind. A fine supporting performance if ever there was one. Jeffrey Rossman as the puritanical, self righteous Klinglehoff is most convincing and Chris Marker as the celebrated King makes a fine entrance.

Overall, the performances are very good. The pace is slow at times, perhaps too slow for a farce, but the actors definitely make the show.

Al Chiappetta’s and Dan Friedman’s set design has that old world look accented with old photos framed and hung on the wall. One such photo adds a comic touch as actors keep trying to keep it straight.

Pam DeHuff’s costumes are appropriate for the era, and it was great to see that Louise’s torn dress was mended during intermission.

Joanne Greco Rochman was a founding member of the Connecticut Critics Circle and is currently an active member in The American Theatre Critics Association. She welcomes comments.

From left, Michael Schaner, Joe Manuele, and Timothy Huber in a scene from ‘The Underpants,’ at Sherman Playhouse. 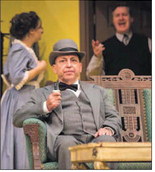