Waterbury was nearly the CWGA’s birthplace

The Connecticut Women’s Golf Association turned 100 this year and celebrated the anniversary of its first championship in 1919 at the New Haven Country Club, one of the 10 founding members.

If not for the death of Archduke Franz Ferdinand, though, the honor of hosting the first tournament might have gone to the Country Club of Waterbury.

In researching the CWGA’s history, past president Carol Galbraith uncovered this nugget from the first meeting at which the constitution and bylaws of the CWGA were drawn up in 1919.

Included in the minutes of that meeting was a reference to “earlier efforts” to organize a women’s golf association in the state. In 1916, the Women Golfers of Connecticut teed off in their first tournament at Waterbury.

There is no mention of who won the event, only a notation that “no action was taken toward making it a permanent organization. The war and the war work made golf an activity to be dropped for more serious matters,” according to the minutes.

The war referred to was World War I, which was ignited by the assassination of Austria’s archduke in 1914. The U.S. entered the conflict in 1917, scuttling, among other things, any women’s tournaments until the war’s end.

(According to a custom that now seems archaic, women were then known by their husband’s first name, a protocol followed in CWGA records until the mid-’90s.) Winslow won a gold medal with a gross score of 91, while Mrs. H.B. House had a net score of 98-17-81, for which she was awarded a silver bowl.

In the afternoon, after the tournament had See CWGA, Page 5B

“IF YOU LET THEM WEAR SHORTS, PRETTY SOON THEY’LL BE WEARING BIKINI BATHING SUITS AND, NEXT, NOTHING AT ALL.” 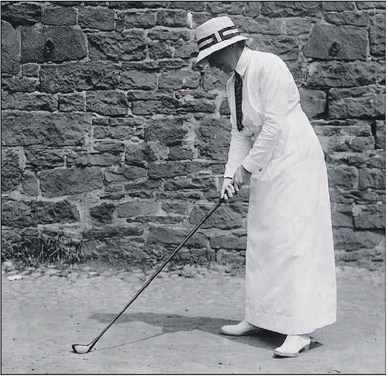 Brooklawn’s Georgianna Bishop was the first multiple winner of the CWGA Championship, capturing the title in 1920, ’21, ’22 and ’27.

concluded, the ladies went back out to compete in putting, driving and approachshot contests. Winslow swept all three, tying with Mrs. Mallard of Highland in the putting and approach competitions.

In photos from back then, Bishop is pictured wearing a wide-brimmed hat; a longsleeved, starched blouse; a long skirt and shoes with heels.

The fight for more comfortable attire was a lengthy one. In 1945, the CWGA executive committee decreed that halters and shorts were not permitted in state tournaments.

In 1953, in support of a USGA ban on women wearing shorts, legendary golfer Gene Sarazen stated, “If you let them wear shorts, pretty soon they’ll be wearing bikini bathing suits and, next, nothing at all.”

Waterbury’s Caroline Keggi, a future NCAA and LPGA star, won four championships, starting in 1984. In 1987, there were two victors in the Keggi household as her mom, Julie, won the secondflight title. More recently, Waterbury’s Nikki Yatsenick captured three in a row from 2011-13.

Mirroring an overall trend in golf nationwide, the CWGA has seen a decline in recent years.

The CWGA stages 18 tournaments each year, with the CWGA championship in June. In 1928, the event, then 10 years old, drew 107 entries, enough for five flights. This year’s tournament struggled to attract 40.

“What I’m seeing is more women working and having less time to spend (on golf). I’m hoping it cycles around,” Galbraith said. “Back in the day, Mrs. Winslow didn’t have to go to work. Today, it’s a different world.”

Attracting the volunteers necessary to run the CWGA has become more difficult, but Galbraith remains optimistic.

“Our future is hopefully bright. We still have women who want to play golf,” she said. “Hopefully this trend will turn around.”

The Country Club of Waterbury’s Caroline Keggi won the CWGA Championship four times in the 1980s.